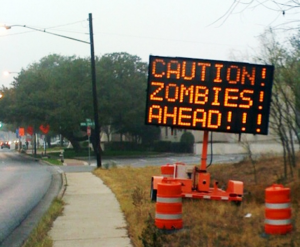 Zombies play an important role in cinematic engagements with modernity and consumerism. The website in media res offers  – among other interesting discussions – a variety of commentaries on the popular US series “The Walking Dead”.

For commentaries on the presentation of religion on TV see here.

Among the few things that are known about the North Korean dictator Kim Jong-il (1941 0r 1942 – 2011) is his passion for films. In 1978, when Kim Jong-ils father Kim Il-sung was still in power, Kim Jong-Il began to develop his own dictatorial agenda and instructed his special forces to kidnap South Korean filmmaker Shin Sang-ok. Shin Sang-ok was forced to make movies until he could escape in 1986. The godzilla movie “Pulgasari” (1985) is not only his most famous work from his time in North Korea, but also Kim Jong-ils most beloved one.

… and the last ten minutes of “Pulgasari”:

In the film review series ‘So bad it’s good’, American film critics Rusty Ward and Kevin Maher give a short review of the film: